Francis M. Darter (1881-1968) was a prolific Mormon Fundamentalist writer. Among the beliefs he espoused was Pyramidology, which proposed that the Great Pyramid of Giza was a “Bible in stone“, setting dates, through its measures, for the most important events in human history. Such beliefs seem to have been influential on Ross W. LeBaron, as the following letter shows.

LeBaron and Darter had a long association, although they disagreed on many theological topics, such as LeBaron’s claims and understanding of the priesthood keys, the main topic of this open letter.  While Ross LeBaron claimed to have “the patriarchal keys of the lineage of the prophet Joseph”, he believed the Mormon Fundamentalist movement operated under “the keys of the lineage of Hyrum”. 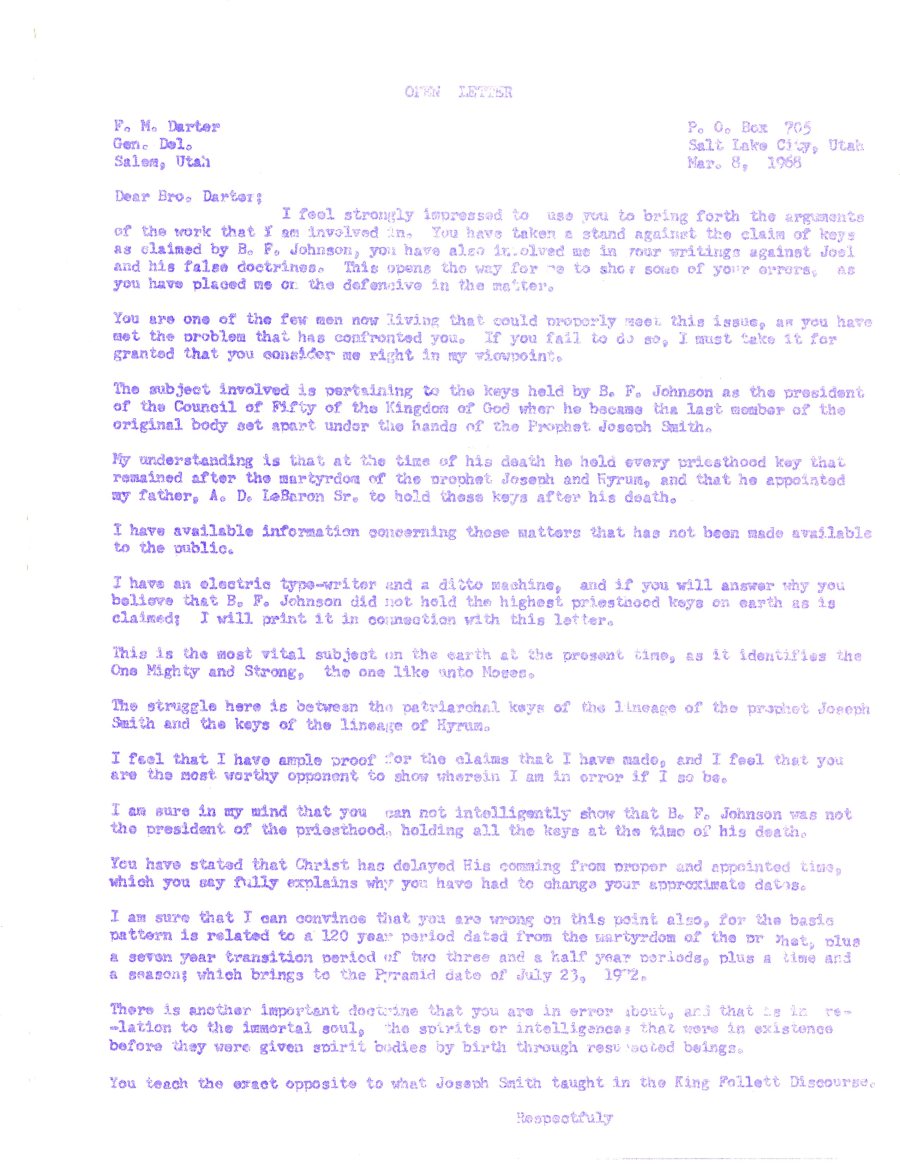 I feel strongly impressed to use you to bring forth the arguments of the work that I am involved in.  You have taken a stand against the claim of keys as claimed by Benjamin F. Johnson, you have also involved me in your writings against Joel and his false doctrines.  This opens the way for me to show some of your errors, as you have placed me on the defencive [sic] in the matter.

You are one of the few men now living that could properly meet this issue, as you have set the problem that has confronted you.  If you fail to do so, I must take it for granted that you consider me right in my viewpoint.

The subject involved is pertaining to the keys held by B.F. Johnson as the president of the Council of Fifty of the Kingdom of God when he became the last member of the original body set apart under the hands of the Prophet Joseph Smith.

My understanding is that at the time of his death he held every priesthood key that remained after the martyrdom of the prophet Joseph and Hyrum, and that he appointed my father, A. D. LeBaron Sr. to hold these keys after his death.

I have available information concerning these matters that has not been made available to the public.

I have an electric type-writer and a ditto machine. And if you will answer why you believe that B. F. Johnson did not hold the highest priesthood keys on earth as is claimed; I will print it in connection with this letter.

This is the most vital subject of the earth at the present time, as it identifies the One Mighty and Strong, the one like unto Moses.

I feel that I have ample proof for the claims that I have made, and I feel that you are the most worthy opponent to show wherein I am in error if I so be.

I am sure in my mind that you can not intelligently show that B.F. Johnson was not the president of the priesthood, holding all the keys at the time of his death.

You have stated that Christ has delayed his coming from proper and appointed time, which you say fully explains why you have had to change your approximate dates.

I am sure that I can convince that you are wrong on this point also, for the basic pattern is related to a 120 year period dated from the martyrdom of the prophet, plus a seven year transition period of two three and a half year periods, plus a time and a season; which brings to the Pyramid date of July 23, 1972.

There is another important doctrine that you are in error about, and that is in relation to the immortal soul, the spirits or intelligences that were in existence before they were given spirit bodies by birth through resurrected beings.

You teach the exact opposite to what Joseph Smith taught in the King Follet Discourse.